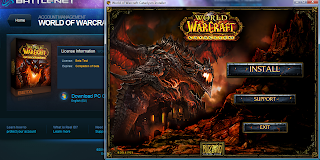 I've actually been away for a week in Amsterdam.. so I'm getting to this late.

The other day I was checkin' my email. "checkin mah email, checkin' mah email, checkin' checkin'.." (ok enough of that for now, reference) when I saw I had something that said: World of Warcraft(r): Cataclysm(TM) Beta Test Invitation, I got a little excited until I considered that it was probably one of those phishing scams that I receive in my e-mail on a daily basis.. except this one was different.. it actually came to the e-mail that I have connected to my WoW account (I forward a lot of email addresses to one address, but my wow email is special) not like the ones I usually receive the scams at.


I read it and figured it was pretty legit
and then started gasping and saying incoherent things to the level of "omg omg omg". Yeah Im excited.


Apparently the NDA has been lifted and I'm free to say what I want about it.. so expect to hear about it from me. I'm behind (as I wasn't home to install the thing) and it's installing as I type (and being damn slow about it too).


I honestly wasn't sure that I'd be buying Cataclysm.. the game is going to change so much and I'm honestly worried if my Death Knight is going to be viable in the next expansion as a tank.. (I'm not excited about having to respecc blood to tank). I considered that I would probably just start all over as a level 1 and explore what there was to see and learn my class (as they claim they will change EVERYTHING) over again from the very beginning rather than suddenly trying to figure out how to replay my class at level 80+.


This is where I think the beta is going to be good for me.. I'm allowed to copy one of my characters over.. so I actually decided to copy my Death Knight to see if it is in fact as bad as I worried it would be. That way at least I'll know ahead of time and not continue to spend so much effort on her but focus instead on another character.


I'm still VERY interested in seeing the world through a leveling up process, so I'll have to play with that as well.


Anyway I hope to keep up to date with my blog and post about stuff that may interest or be of use to other players. I know I'm way behind on that level and there are sites out there that will take this to a more thorough level than I will, but maybe it's good to see things from a casual perspective too.
Posted by Anex at 3:22 PM