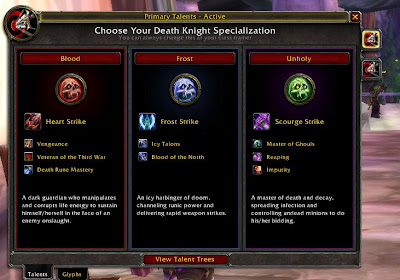 When I heard about how these were coming the other day I first thought to myself, "Noes! That last blog I just wrote was a lie then!". Luckily I wasn't entirely off and now I can give a more accurate description.

The new talents trees are smaller, you have less points to spend, so this makes sense. I am unsure of the rate at which you gain talents points to spend. After spending my 36 points I had at level 80, I had a message at the top of my tree informing me that my next talent point would be "earned at level 81". (Yeah I still haven't leveled yet) The new trees also force a "primary spec". By that I mean it is no longer possible to be classified as "Hybrid" (take a look at some WoW Armory profiles). 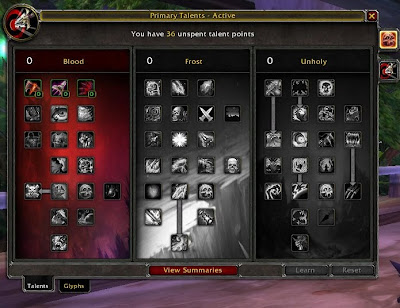 I put the 31 in quotes simply because you do not only have 31 points to spend at the max level. However the 31 points are what you MUST spend in a tree before you are even allowed to think about putting points into another tree. (Personally, that is going to force me have to re-think my dual wield tanking). The other trees will remain grayed out until you have spent 31 talent points in the tree you chose from the first talent menu.
Should you remove points from the primary tree, the other tress will again be gray. There is no working around it, you MUST have at least 31 talents in your primary tree.

This is something I'm really liking about the new talent system. I was always honestly bothered that there was never a sense of dedication to anything since you had dual specializations and were always able to re-spec. Now at least once you pick a tree you have to stick with it until you have spent 31 talent points in the tree.

Some people are calling them "Bonuses", either way works, I just prefer passive to better describe how they work.
You may have noticed from the first screen shot that there are some abilities given with the talent tree you choose. The first (larger icon) is an actual ability that you will gain just from choosing the tree. In the case of the Death Knight Blood Tree this is Heart Strike. You also gain 3 "passive abilities". These abilities are unique to your spec and you will NOT be able to have them AT ALL if you are not that spec.

Again, as I have stated in the past, I myself am a Death Knight tank and will mainly be focusing on stuff related to that point of view.

The passive abilities for the Blood tree are: Vengeance, Veteran of the Third War, and Death Rune Mastery. I'll stress again IF YOU ARE NOT BLOOD SPEC, YOU WILL NOT HAVE ACCESS TO THESE ABILITIES.

This prevents non-tank specs from having tanking abilities and why I said earlier that "if you are not the proper spec, you will not be able to tank".

I spoke briefly about the Veteran of the Third War talent in my last blog post. I stand by what I said about how I thought there would no longer be separate tank and DPS gear.
To test out this passive ability I switched to my unholy off spec (for soloing) while leaving on my tank gear.. the difference was about one thousand health (which while it kind of seems negligible for now, it might make a difference later with the new gear and items stats as I'm mainly wearing my pre-Cataclysm gear).

Death Rune Mastery is just a great talent overall and it will be unfortunate for the other specs to miss out on, but I'm glad they have allowed the tanks to have it. 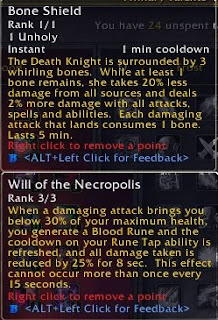 Keeping in mind that previous to the Beta I was a dual wielding frost tank, getting used to all these blood talents is going to take some work. There are a lot of great abilities though in the tanking tree and I'm eager to put them to the test.

As I mentioned previously Bone Shield is no longer an Unholy ability but now in the Blood tree for tanks. It has a short cooldown but you also lose a bone every time you're hit.. seeing that as a tank you're SUPPOSED to be hit you can pretty much assume that while you'll try to keep it up at all times, it's not going to be too possible (the downtime should be short though).

Will of the Necropolis looks VERY nice and is definitely something I will have to play with.

Improved Blood Presence is still in existence and will be required in order to attain crit immunity. It is located deep in the blood tree as it should be.

There is no longer a "2 handed specialization" talent (at least not located in the blood or unholy tree), which means if I manage to spare enough points I can maybe still try to reach the Dual Wield talent in the frost tree as it is only in the second tier. If not I will probably go back to 2 handed tanking for the purpose of boss parry/haste.

I'm actually happy with the changes to the talent trees. I think it's a good change and will force a level of dedication to choices you make in game. something that World of Warcraft has always been lacking in my opinion.

For a look at the special abilities and passive abilities of other classes check out this post over at WoW.com: Cataclysm Beta: New 31-point talent trees, spec bonuses and more.
Posted by Anex at 3:03 PM