The Effect of Cataclysm on my Death Knight Tank Thus Far 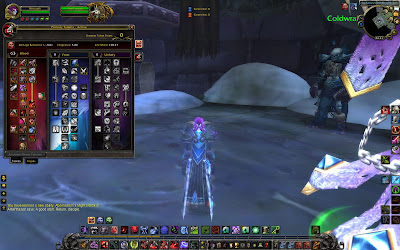 I know that most people are probably hoping for (and expecting) specific details about high-end etc when they look up information on Cataclysm, let me just say right now that this isn't where I'm going with these blogs.

While I may include some specific details about items etc, my blogs will generally be from the perspective of a casual player (keep in mind I'm the mother of a 2 year old and have various other online duties I attend to in my gaming communities) to give and overall opinion on things.
Sadly I haven't had the opportunity so far to play as much as I would like due to time constraints and server stability issues for the EU server but I have already formed some thoughts an opinions.

After a lot of problems even copying my character into the Beta (due to language selection affecting account and DNS cache issues for a reloading transfer page that did nothing), I logged in eager to explore what I could right away.
That didn't work out so well..

Aside from the usual annoyances of having to reset my UI the way I like it I needed to respecc COMPLETELY. I know it's always that way with new expansions, but what I mean is in order to continue to keep my Death Knight a tank I was going to have to give up on my frosty ways for Blood. I expected and knew this change would happen after Blizzard previously announced that the official death knight tanking spec was blood, but it was still an unpleasant process.

Frost presence has essentially been renamed blood and vice versa. All the tanking talents from frost have been moved and slightly modified for blood. Unbreakable armor is no where to be seen and Bone Shield is now a tanking talent located in the Blood tree.

My biggest question was "how will I handle AoE encounters?". Previously this was solved by using Death and Decay, Blood Boil and Howling Blast.. now Im without my howling blast and without enough points to decrease the cooldown on death and decay as it seems to have been moved further down into the unholy tree (something I'm unable to spare points for at level 80).

What I can figure (and do indeed hope for) is that the whole "rush in and AoE everything" has been toned down. I do remember Blizzard talking about bringing back crowd control actual tactics (like in the good ol' days when people knew how to play). I haven't got the chance to experience the new dungeons yet, but I'm definitely eager to check them out.

Another problem I encountered was with my weapons. I had spent weeks working on getting weapons to have dual wield tanking. In blood I feared I'd be forced to use 2 handed specc, but I managed enough spare points to be able to pick the DW talents from frost. (I've yet to see if DW blood tanking is viable, and I'll have more on that in the future).

It also appears that Dancing Rune weapon (the ultimate talent of Blood) is not yet available in the Beta (or bugged) as I was unable to find it AT ALL in my skills book or at the trainer even though I had the talent (it does not say it is passive).

There seem to be a lot of skills and not enough hot bar room (unless I start sticking a lot of my abilities on the side bars which I find unhandy) which does irk me a bit. This doesn't even factor in that after 5 levels have passed I'd have more abilities I would need to add to the bars. Perhaps over time I can decide if all the abilities are worthy of a place or not.

That's pretty much as far as I have gotten in regards to actual progress on my Death Knight. I started some questing yesterday but server stability issues made it near impossible to play (kicked literally every minute) so I haven't really got the chance to test things out properly.

I have messed around a little with the goblins and exploring things a bit which will be a topic for later. In the meantime here are some screenshots I have taken so far:
WoW Cataclysm Screenshots
Posted by Anex at 3:48 PM