One of the key selling points for me on the Rock Band 3 keyboard was the fact that it could also be used as a MIDI device (read: real instrument). For 80 euros ($105, yeah they like to overcharge us on stuff in Europe because they give us the US price and tack the euro symbol on it), I got not only a game controller, but something potentially more. This functionality was touted by Harmonix and game reviewer alike.

The keyboard has even been reviewed as a MIDI instrument and has been given good ratings. Articles such as this one: Hands-on: Rock Band 3′s Keytar, a Surprisingly Serious $80 MIDI Keyboard go into more specific details about the specs of the keyboard itself (a good read and a good place to find some needed information if you dig), but all these articles lack something.. something really important that the average music noob like me doesn't know or understand. I guess I falsely got the impression that the MIDI option for the keyboard was a great thing for beginners, boy was I wrong. That's where this blog comes in.


All I wanted was to get my Rock Band 3 keyboard to work as a simple piano. I'm taking lyrical singing lessons and am a pure beginner. I need to practice scales and things like that. My thinking was that with the right cable-age (yeah cable-AGE) I could have a simple piano using my Rock Band 3 keyboard ("two birds with one stone" was my thought process when purchasing it).

I know NOTHING about MIDI.. hell I can't even read music nor play a musical instrument (unless you count Mary Had a Little Lamb on the recorder) so all this is brand new to me. Everything I learned about getting my RB3 keyboard set up is from reading forum posts (and sadly many questions by people there have gone unanswered, questions I myself had), blog articles and things like that.

You see, the last 24 hours has been a bit of a struggle for me. From running around (on foot I might add) between music stores and doing google searches with said music store employees to spending up to 3 am at night trying to find software, getting this keyboard set up has been a bit of a pain to say the least. I'm hoping that I can help prevent the frustrations and lack of sleep for someone else by writing this and gathering that information in one location.

Things You Need to Know:

Personally, that fact alone made me unsure of what to buy (which is why I resorted to hauling around my keyboard with me to music stores). If you take a look at your keyboard you will see only ONE MIDI port. That MIDI port is a MIDI out.

Most cables have MIDI out and MIDI in. In this case you only really need the MIDI out. If you have a cable that has both just ignore the MIDI in part of the cable. It will still work.

If you're using a USB MIDI interface device (like I am, the Cakewalk UM-2G USB MIDI interface, to be specific), you will also need to purchase a simple MIDI cable. These are very cheap and male to male ended. You need to plug one end into your keyboard and the other into the MIDI 1 "In" slot.

I feel it important and noteworthy that unless you can not find a USB to midi cable, or unless you want to do very professional more complicated things with your keyboard and other MIDI instruments, there is no need to go this route. It is only more expensive for someone who wants to just simply "play" without the fancier recording possibilities.

If you're going this route please note that you need to install the drivers BEFORE you plug anything in. Even if it does not say you have to, restart your computer after you have installed the drivers (not restarting caused me some trouble).

"The catch" . I say that because software is NOT free and NOT cheap (unless you're on a mac, I'll get into that in a bit). I always figured I would need software to play my keyboard but I had no idea how hard it would be to find without forking over and arm and a leg. This is most of where my struggling took place.

If you're lucky and your USB MIDI interface device (assuming you went that route) comes with software, install it. You've just saved yourself a HUGE headache. The one I purchased did not come with ANY software sadly, not even a trial.

Those are the key points to know to help you get started with what you will need.

The actual "easy" part. You can probably figure this out yourself but just in case...

For MIDI to USB Cable:

Keyboard MIDI out port => MIDI cable plugged into the "IN" port on your device (channel 1, or "1" if you have more than 1 channel) => USB slot => Computer

For those with a Mac you're in luck. Now I don't have a Mac myself so I can't go into specific detail, but I have been told by someone who has one that once you plug your device in your mac will recognize it as a MIDI instrument and you can then use GarageBand (part of the iLife suite) to play it.

For those of you who are less "trendy", you're pretty much up Sh-t creek without a paddle. I spent countless hours looking for a free, legitimate and safe software without a whole lot of luck. I installed at least 20 different programs and tested most of them to no avail.

I actually own a copy of Guitar Pro 6 (got it for the husband) which I thought may work but sadly it does not. You can write music using your keyboard onto a score (that works) but you will hear no sound and it will not play back. Kind of useless for what I wanted.

So let me present you with your paddle: ZynAddSubFx. It's free, it is easy and it is relatively easy to figure out. The only hard part I found about the software was actually getting a hold of a binary (.exe) file as it is offered as a tarball (.tar) you have to compile yourself.. too much work and above my level of knowledge.


The binary executable file can be found here, Setup_ZynAddSubFX-2.1.1, albeit in an older version (look for and download the .exe file).

Use of your keyboard is going to vary depending on your software but overall hardware functionality is the same. It would behoove you to note the following use for the buttons (thank you to the article written by Peter Kirn referenced at the beginning of this blog).

Keyboard: 25 keys transmit normally, with velocity. (No aftertouch. I’m glad we get velocity.)
In drum mode, the keyboard transmits General MIDI drum parts, which is, of course, handy for playing drum patches. (It’s also handy for confusing the hell out of you if you didn’t know that’s what it did.)

Touch controller: 1-axis modulation. Hold down the “Overdrive” button, and while that button is held, it sends pitch bend – which makes pitch bend nearly unusable. (Too bad they didn’t just make the Overdrive button a straight toggle.) Works well enough for Modulation, though.

Transport controls: The Back, Guide, and Start buttons on the Xbox gamepad correspond to Stop, Continue, and Start MIDI messages, respectively – so if you’re tracking your next Rock Band Network song in Reaper, you can control your takes right from the keyboard.

Pedals: There’s one pedal port on the side. More on how to use this soon; I haven’t yet tried it. It’s a 3.5mm jack, but I have to find out the voltage. Stomp should work fine with a standard Rock Band drum pedal, and in the default mode, you can use that for a damper pedal. For expression, you need something that sends analog voltage.

Panic: Press the Back, Guide, and Start buttons simultaneously to switch all notes off. (Curiously, this appears not to be the same as on the guitar, but I can only test the keyboard to know for sure.)

The weird thing about it that bugged me was that there was no visual indication for what octave I was in. The LEDs on my keyboard would light up when I'd change octave, but in a flash pattern and then return back to the first light... making me wonder (according to the information quoted above) if my keyboard is defective or if this is just an oddity.

If you go too far down or too far up you essentially end up "off the board" to where half of your keyboard will not work (because you have run out of octaves.)

Familiarize your ear with C4 -C5 (knowing just C4 and C5 is good enough) to find your position back at middle C vicinity (middle C is C-4) and give you a reference of where you are on the keyboard.
C4 would be the last key to left of the keyboard and C5 the furthest on the right to put it all simply.

In case you decided to use the ZynAddSubFx software as I did, here's some help getting that sorted.

ZynAddSubFX looks a bit daunting, even in its "Simple Beginner Mode" interface. 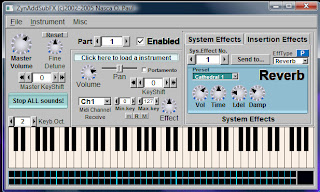 Personally I haven't played too much with the software, I only wanted a piano so I'm satisfied to use it simply.

The only thing you really need to touch in order to do the same is to select the proper MIDI channel (look for "Midi Channel Receive") and choose the sound of your instrument.

In general the MIDI channel should be "1".

To choose the sound of the instrument click on "Click here to load an instrument", push the down arrow on the blank drop box, select your sound type and the choose the exact sound. I'm generally use "Synth Piano" and "Soft Piano 1".

After getting everything plugged in, installed, restarted etc you should be set to use your keyboard as an instrument. Simply turn it on (you'll know your good when the red LEDs are on), fire up your software and go!

Hopefully this noob guide removed a large part of the headache that comes with trying to get this set up when you know nothing about MIDI or keyboards.

Once you've figure it out, it's a decent little setup. My own personal irk is this though, seeing as how almost all the software out there is in general so expensive and professional (lots of youtube videos of people using the keyboard for MIDI and mentioning their professional software) why in the hell would someone who already has all this software (and probably equipment) want to use the silly RB3 keyboard when they probably have better?

I think MadCatz or someone could have taken advantage of this to market it as a beginner device (or at least that is how I felt it was marketed) by selling a very low and reasonable cost simple software to use with the keyboard. I know it'd probably be a pain for them, but there was so much potential to be had there.