Video of the Week: Valkyries (RBN), choosers of slain! 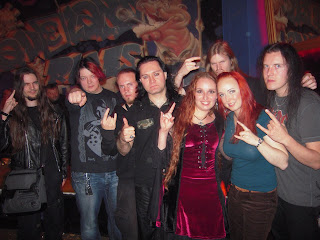 Just what I've been waiting for, more Amberian Dawn in Rock Band! Yay!

If you don't know already (shame on you) I am a HUGE Amberian Dawn fan and helped bring them to the RBN for the enjoyment of all.

Valkyries is actually one of my favorite AD songs so I was really happy when this went for sale yesterday on the RBN.

This song SHOULD be hard to sing, but since you don't have to sing it as high as Heidi does, it's not really as hard as it sounds. I managed to sight-read FC this yesterday but didn't get a video up as I had planned because my monitor died during the recording. I was forced to hurry my butt to the stores before they closed to buy another.

I chose to sing it as close to the original version as possible, for me that's the fun of AD's songs on vocals anyway so why ruin it?
Again, I haven't had any singing lessons so I'm not claiming I can do it well or properly, but I try. (I registered for lyrical singing lessons though and need to call the teacher this evening, we will see how that goes) The mic also doesn't like such high notes..

This song demands a lot of breath control which I honestly don't have. There were a few places where I was literally forcing the last amount of breath in my lungs out my pushing hard with my diaphragm/stomach.

On top of that, while I didn't have problems yesterday, I had real trouble today with an early window (overdrive activation that requires you to activate sooner than it looks because anything past that point will not activate) in the song. It's actually the window right before the "Howling wolves in the night carrying female deities.." trying to squeeze for points is hell because of that.. I'm not very good at squeezing as it is.

Speaking of lyrics there is actually an incorrect lyric (which I also see on another lyric website) in the song.. "shading a strange light - the northern lights!" It's written in the album booklet "shedding a strange light - the northern lights!" Lots of people have the lyrics for the album (and even some song titles) incorrect partially because of the font. (T's look like C's etc to where often FaTe of the Maiden is written as "FaCe")
Anyway I sung it as "SHEDDING" like it should be (and you can clearly hear) only because I'm picky when it comes to Amberian Dawn stuff :p

For fun in this song I used my "me" character and gave her a look suited for battle to go with the song ;)

Also this just went out on the twitter verse: Sunlight, Steel, and Thunder: An Interview with Amberian Dawn yup, I'm the fan Tommi is referring to :)