Change of Plans: Thank You E74 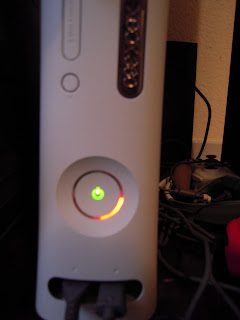 Today I got the dreaded E74 xbox error. I'm going to partially blame Guitar Hero 5 on this one. As far as I know (and this seems specific to my case)this error is related to video/graphical hardware problem.

It happened that I was actually working on a video for next week, a Guitar Hero vocal video, just to switch it up a bit. I use a dazzle to capture the in-game footage, but my dazzle seems to be compatible with PAL only. As I live in Europe this normally isn't an issue. With my xbox I have the display options of PAL-60 and PAL-50. For my dazzle to record in color I have to have my xbox on PAL-50, being that you can't really see the difference I've always just left it there. I've never had to worry about changing it except to play Guitar Hero 5 actually.
The game was purchased in France (where I live) and clearly states "PAL" on the back but for some reason it tells me it is not compatible with PAL-50, so I had to put my xbox in PAL-60 (a fake NTSC if you will) to be able to play it. This kind of rather sucked as my dazzle would only record in black in white, but I went ahead and did it anyway.

After I got a video recorded, I decided to work on a Rock Band project I had planned to do with fellow Team Cena member dpritch. Well since Rock Band actually lets me play in PAL-50 with no complaints I decided to switch back my display settings so I could record in color at least. I went ahead and changed my settings back to PAL-50 and headed through the xbox panes over to "Play Rock Band 2". As I was passing through the frames I noticed that my xbox avatar looked weird.. she had all kinds of lines going through her and she wasn't whole. She was rather graphically messed up. I figured it might be because I had just changed my settings and decided to give my xbox a nice restart... 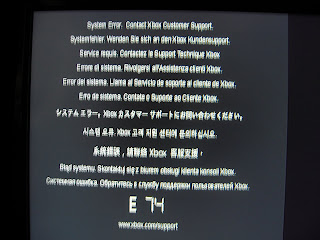 When I turned it on it sounded strange, nothing was on the screen and then suddenly I see:

I tried everything I could think of, praying that this wasn't really happening.. but nothing worked. I took the HDD off, I tried a HDMI cable instead of the furnished component one.. but no luck, I was left with no choice but to call Microsoft.

Calling Microsoft was a pain though, luckily you're given the option to speak to someone in English (despite the fact I called the French number), but I guess they outsource their tech support to some country where the people don't speak English natively. Don't get me wrong the twice I called (yeah I had to call twice for something not their fault) I spoke to two very nice and helpful women but it was so hard for me to understand them, we had awkward moments of silence and misunderstandings.

Anyway the good news is that for E-74 the repairs will be covered, so I won't have to pay for anything. The bad news is that I need to find a box at a store. All the stores had already closed for the day when this happened and things in France are always closed on Sunday so I have to wait till Monday. Then I got to schedule a pick up and after that it is about 2 weeks wait. Knowing my luck RBN will be released and I won't get to pounce on the Amberian Dawn songs like I've been dying to do for months now.. -sigh-.