OMG RBN! Video of the Week: River of Tuoni 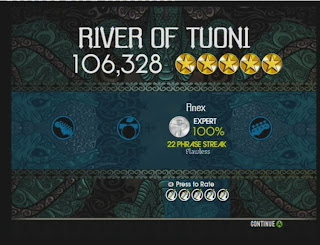 I totally had intended to remake my first ever youtube video but I had a change of plans.

It just so happened that while I was failing at FCing Forever by only getting a strong on the last note Dpritch sent me a message on xbox live talking about the ever spreading rumor that the RBN was coming TODAY!

I immediately decided it wasn't worth continuing to kill my voice for In This Moment- Forever and hovered over twitter watching for the latest news..

And then it came... Rock Band Network was listed under the Music Store and I instantly downloaded the 2 available Amberian Dawn songs (Hey! I helped get them in the RBN ok?) Naturally I went straight for River of Tuoni.. I mean I love Amberian Dawn but He Sleeps in a Grove is not one of my favorite songs of theirs. (I can't wait for the incoming 5 new ones)

I'm actually EXTREMELY lucky I got to play these songs at all because the RBN was not available everywhere.
I only managed because I have a US Xbox Live account and I had points from when all my lovely friends sent me MS points for my birthday in December. I'm glad I saved them for RBN.

Anyway, I was soo excited and full of adrenaline my hands and my voice were shaking.. so I got a 98% on the Sight read (who knew that missing percussion notes counts against percentage? boo :/) 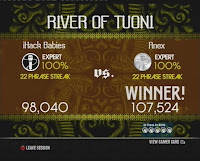 The REAL FC came (and probably first FCs of the song 3/4/10 18:45 GMT +1) were when Dpritch and I did a vocal score duel we BOTH FCed the song (he did a sight read FC though, kudos to him) I have the video that I will post up later.

As for my weekly video I did this as an Amberian Dawn tribute. I had my River of Tuoni t-shirt and use my microphone signed by Heidi (vocalist of Amberian Dawn).

There is a down side to using that old mic.. it can't handle the high notes.. upside though is you CAN hear me.

Hope you enjoy this week's video.. in lieu of my purple mic I used purple lipstick.. too bad it came out looking like crap.. the lighting was also crap as I recorded this at night.

Oh! And do you know?! WMG actually had the gall to claim copy right on this song.. they have NO rights to Amberian Dawn.. bastards..


UPDATE: Since the original post of this blog the following has occurred: 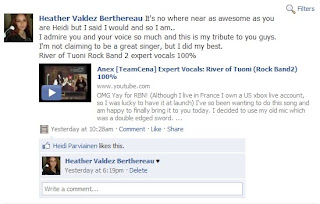 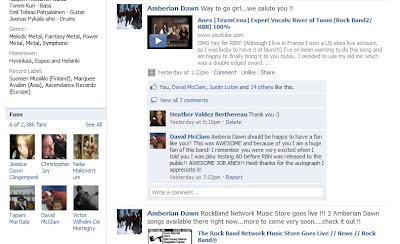 I was really floored! It's a real honor for me to have Amberian Dawn recognize my video :) ♥ but at the same time I was also embarrassed because now LOTS of people will see that video (I really shouldn't have worn purple lipstick.. lol)  The members of AD are really awesome.
Posted by Anex at 11:15 PM