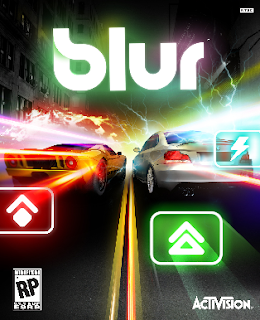 So today I received a beta key for the Blur Multiplayer Beta Demo on xbox live. (you can still try to get beta keys!) I actually didn't know anything about this game until I received an e-mail from my local gaming store offering me one a week ago. I checked out the site and thought the game looked interesting enough to give it a shot.

Blur is a racing game by Bizarre Creations and Activision. I wouldn't limit it so much to a "racing game" as there is a bit more to it than that but this is the easiest genre I can find to label this game with.

At first glance (and even after playing it) I'm reminded of some old games I loved to play with my brothers: Extreme G racing (1 and 2), San Fransisco Rush 2049 battle mode (both N64 games) with a mix of Burn Out Revenge. This is actually a good thing as I have a lot of fond memories of multiplayer mode on these games and probably why I'm already looking forward to the full release of Blur.


If you're not familiar with any of these games you might liken it a bit more to Mario Kart but with clickly less "cheesienes" (not to say that cheesy is bad, I like Mario Kart).

Blur boasts 4 player split screen play, 50 ranks and 60 challenges with over 30 tracks from L.A. to Japan. You can unlock new cars and new mods (will go into mod detail in a bit) along with the ability to customize both.

I was also a bit excited to see that you could authenticate with your twitter account to tweet your skills. It doesn't seem to be working in this beta demo version, but it sounds awesome as long as it won't get too spammy.

In Blur multiplayer you have special "power ups" that will allow you to attack/slow down your enemies, protect yourself and gives your car some boost to finish the race.


Shock- Fires 3 EMP fields in front of the race leader.
Mine- Throw it ahead of drop it behind! A mine spins vehicles out.
Barge- a close range attack that blasts vehicles away from you (think the giant speakers in Rush 2049 battle mode)
Bolt- Shoot 3 energy rounds to nudge your opponent off course (a bit disappointed in this one, I think they need to maybe up the number of rounds to make it viable)
Shunt- A powerful homing missile that flips cars into the air (my personal favorite)
Nitro- Intense burst of speed! Fire backwards to use as an airbrake! (pretty straight forward)
Shield- Protects from power up impacts and collision damage. (very useful)
Repair- After all the punishment a quick fix is always helpful (no lie!)


These are the power ups you will find along the race tracks during online play, they add some lovely spice to an otherwise boring race. You are able to hold 3 power ups at any given time, you can cycle through them to reach one you want to use and even ditch them on the track if you don't want them.

For the most part these power ups are deployed in front of your vehicle with the exception of the mine. You can however alter the default direction by pushing down on the left thumb stick to aim and shoot it at someone behind you, or do the opposite to throw a mine in front of you.

You can also use power ups to avoid incoming damage, and I'm not just talking about the shield. Other than being nimble you can employ a barge to destroy a shunt that is headed your way! This gives a bit of strategy to the game as well making it even more fun!

Along with the damage from power ups you also take damage by colliding with cars or obstacles around the track. If your car takes too much damage you will be "wrecked" and suffer a 3 second penalty, this is why repair is a very handy and useful power up. You also take a penalty if you end up spinning out of control (and therefore facing the wrong way) on the track as the game places you back on the track in a forward facing position. I am unsure whether this is intentional but I would much prefer to be able to correct my facing position myself rather than the time it takes for the game to correct it as the delay is a bit much as punishment.

Ranks are gained via "fans" in online play by placing in races (higher place means more fans), damaging your enemies, doing "tricks" (long drifts, fastest lap etc) and avoiding power up damage (by dodging nimbly or using a power up to block damage).

At the end of each race your fan total will be counted and you can increase in rank. New ranks unlock more cars, races and mods.

Your rank can unlock mods.

Mods are modifications you can add to any of your vehicles that will either modify how much damage you do/take, how you gain fans, and whether or not you start with a power up. (one mod has a "bribe" modification that allows you to start with a non-offensive power up)

There are default mod sets such as "aggressive", "defensive", "show off" and you have the ability to modify the 3 actions each mod applies to your vehicle for further customization. This gives you the ability to adjust your vehicle to your play style which I find to be a great thing (I'm personally a "defensive" user).

Cars are unlocked with ranks.

As with nearly all racing games you can unlock new cars that have different handling, speed, acceleration etc. From what I have seen there are 4 sets of cars and only 1 set allowed per track. You are free to choose your car at the beginning of each race but only from the allowed set.
It is also possible to customize your car visually with different paint jobs that include not only color but some more special options which I currently do not have unlocked to test.

Overall this game looks promising. I'm really enjoying the multiplayer mode and the screams and laughter that ensue from attacking your enemies or narrowly escaping an incoming shunt (I prefer to just call them homing missiles really..).
Everyone I played with seemed to also be having a good time and laughing it up. I honestly spent most my time in last place (even though I tend to do really well the first lap) but still enjoyed myself. It seems like one of those games where half the fun in getting attacked and plotting revenge, and that is the kind of fun I enjoy.
Posted by Anex at 5:24 PM