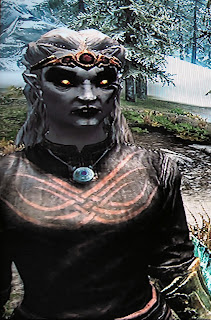 As you may (or may not) remember, I have been slowly working on completing all the achievements for Skyrim on xbox 360. To make keeping track of that a bit easier through my blog, I have especially created a tab that directs to my Skyrim: All Achievements post which is updated as needed.

Because I destroyed the Dark Brotherhood on my first/primary character long before I even thought I might care about the achievements (which require you to follow through the entire DB chain) and because I had cured myself of Lycanthropy and didn't want to reinfect myself AND because I also denied becoming a vampire lord and completed the chain from the Dawnguard side, I needed to create a secondary character in order to get those achievements.

I really like Skyrim, so I wasn't bothered by the fact that I needed to create another character. In fact, I had intended to do so eventually on my own anyway to see some quests from another side, especially from Dawnguard. I had only previously hesitated creating a second because I was unsure how to keep track of my saves and not lose my primary, but once I discovered I could save another character on another media device (memory card in my case, yes I had one..) without hassle or fear of mixing them up, I dove right in.

I wanted to create a new character that was unlike my previous one to make the game feel new again and keep the challenge. Raewyn was a Bosmer dual wield melee, so I decided a caster would probably be quite different. I've never been keen on playing casters, it isn't my instinctive choice and usually something I force myself to try in every game to see how it is. I've always been more drawn to weapons and my first characters are always closer to myself in appearance and personality (in how they react to quests etc).

So was born Malyce, Dunmer caster. (Malyce is a hat tip to Matron Malice Do'Urden mother of Drizzt) Malyce would reflect a bit more my darker personality and sometimes be a bit of the antithesis to myself, while not necessarily being inherently evil (I like to take my game playing a bit deeper). Her main purpose: joining the Dark Brotherhood, mastering werewolf and mastering vampire lord; but I wasn't going to deny myself the pleasures of playing through again either.


Playing as a caster was very strange at first and I don't think that the game is really convenient to a caster. I spend the majority of my time in the favorites menu switching spells around, it can be quite annoying. However casting is a whole different way to play (for myself). I actually have to THINK before I act instead of just rushing in as a flash of blades. I also often have to have a follower with me or face certain death (I'm not so great with wards etc), many times I have accidentally killed my followers -_- (oops, fireball xD).

'Armor' is boring as a caster, annoying robes that often cover your head (I'm a bit vain with my characters) and wearing the same crap forever. I know I could wear heavy armors, but I don't have the skill needed to enchant them worth the damn and at the same time half the point was NOT to wear the same things as Raewyn (though she wears light armor). I also carry like 3 different sets of gear especially for the cases where I have to go healer on my follower (which happens more than occasionally).


After completing the required Dark Brotherhood quests/achievements I moved on to focus more on Werewolf Mastered. Playing as a werewolf wasn't easy, I never cared for it when I went through the Companions quests either with Raewyn. The third-person view was incredibly annoying and I felt weak compared to using weapons, kind of like flailing randomly with teeth and claws. It took a lot of killing (and being killed by :x) Farkas (husband/follower) before I finally got the hang of things. Sometimes I would cheat a bit by killing people first in "human" form and then going back and eating corpses and after getting the Ring of Hircine that helped make it a bit easier as well. As time went on I became stronger and was able to control my attacks with a bit more precision. I am unsure as to whether that was due to becoming accustomed to playing as a werewolf or that as you increased werewolf perks you gained more control (I suspect a bit of both).  Once I had unlocked all 11 perks I then moved on to curing myself and accepting Harkan's offer to be a Vampire Lord.


Vampires. Meh. There was a time were vampires used to be cool, like when I was in high school ( 10 year Reunion is coming next year /old). Then, this really shitty book and later crappy movie with bad actors came along called Twilight. Vampires forever ruined and loved by 12 year old girls and sad, pathetic, pedophile older women (I'm harsh).
So where I may have been interested to join the vampires, say 10 years ago, my first run through Dawnguard I only wanted to kill them... this time I needed to join. It was a real pity that I let my hate for Twilight deter me from playing through that quest line because so far (I have not yet acquired the achievement nor finished the main questline) it has been really fun and far more amusing than joining the Dawnguard.

I must admit I also wasn't too crazy about turning into this ugly giant gargoyle looking thing  "Vampire Lord" and I still think it is ugly and looks stupid, but it isn't much different than being a werewolf. It was also interesting to see what the affect would be on the appearance of the "human" form of my character. (You can not change your appearance after by the face sculptor because her abilities "only work on the living"). I kind of regret not taking a picture of Malyce before being bitten to compare. :/

I find being a Vampire Lord is a bit more controlled in that I can revert back and forth more than once a day without the requirement of a daedric artifact but still has its "I don't know what the fuck I'm doing" element as well. It is too easy to piss off your follower to where they attack you, so I have to play solo more, though Serana is pretty ok with you (makes sense). The problem though is it is HARDER to fill your perks. If you are not the one who delivers the killing blow, you don't get credit for it. This is a real pain when you have a follower, and Serana has KSed me a few times. I still have yet to figure out how to get perk credit when killing in melee form and I should probably read up on that *makes note to look it up*.

Vampire Mastered is an achievement in progress and I am at 3/11 perks.

Malyce was really created specifically for achievements but I'm really enjoying her so far. I intend to play her beyond just achievement whoring.

Dragonborn comes out December 4, 2012 (4 days before my birthday! Must.Get.MS Points!) and I will probably go back to playing Raewyn a bit and finishing up the main story line of Skyrim before moving on to Dragonborn (which hopefully should make grinding to level 78 less boring) and then following back through with Malyce.

It is true that Dragonborn is going to put me behind again on my goal to earn all the achievements (expansions and addons always add more), but I really don't mind. I'm having a lot of fun right now even after almost having Skyrim for 1 year.
Posted by Anex at 3:24 PM