Here we go...! I saw this floating around on twitter yesterday but didn't want to touch the topic, but after an article over on CNN (and the irritating comments left) I feel compelled to say something about it.

First of all, here is the article: 'Lady game creators' meet up on Twitter'. The article talks about the issue in the detached tone, blanket generalization that most big media articles on gaming (and even worse, women in gaming) tend to take. Never touching on the REAL issue or really understanding what is going on.

CNN asks for those involved in the topic to share and so I threw my two-cents in answering this call: "Are you a female interested in the video game industry, or do you know someone who is?"

Now, I may not be involved directly in the development side of things, I don't have the education level developing requires, but I do have a passion for video games. I also gave up on being more professionally involved in other ways some time ago (for multiple reasons which I will not get into here); but that doesn't mean I don't have an inkling of a clue of what I'm talking about either. More so than the random CNN correspondent that knows nothing of video games or women in gaming anyway (no offense to CNN, and not including some of their gaming journalists).

What irritated me the most with this article wasn't really the article itself which offers no real opinion or substance simply because they don't have the knowledge or background to do so anyway, but the comments. Scroll through them and you will find the cliché stereotypical things you always hear about women and video games. From your trolling "get back to the kitchen" to the, "women just want attention" comments. 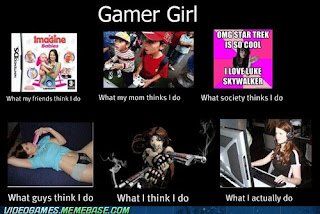 Most women know that you won't be taken seriously if you flaunt around your gender (neither by men nor other women).

There are PLENTY of women in the industry, but they prefer to just be known for what they do rather than what is between their legs.

Sadly we can thank some other women for these issues. You have two kinds of self-harming to the cause women: the eye-candy and the "attention whore".

In regards to booth babes (the eye-candy), I think most of us know generally (very rarely) they don't have any interest in gaming. They are the scantly-clad models there purely to attract males to the booths and sell product. For them it is a job and they are not interested in the harm they are doing for other women in the industry because it doesn't concern them.

Then there is the "attention whore". You know the type, we've all encountered them. The girls that may have an interest in gaming but also feel like they have to take a down-the-shirt shot of their cleavage and attach some generic gaming related comment and tag it with "#sexy", be it on twitter or instagram. Intentionally using their bodies to get attention more than their skill/interest, or just simply choosing to focus more on their wiles instead.

You also have the problem of stereotypes from the male perspective. There are those that either genuinely believe women don't have interest in gaming nor the skill it takes to play a serious game (the ones that think girls are only playing the Sims or the Imagine Fashion line); or the ones that tell you to get back to the kitchen when you're playing because they feel you have encroached on their territory.

It is just easier to NOT go flaunting your gender and earn respect for your skill or interest in games first and foremost. Then, MAYBE if you mention your gender afterwards there is already no denying that you are to be taken seriously because of your previous feats.

What women want is often a mystery, even to us. Many of us (myself included) say we want to be recognized for our gaming interest only, but then we go and do things that are gender specific.

I myself am a member of PMS Clan which is an all-female gaming clan (leaving H2O aside for argument's sake), the clan was created with the intention of showing that there are serious female gamers out there and to put emphasis on that... yet it is gender specific. It is true that the clan was created to give women gamers a safe haven from a lot of the abuse women get when it comes to online gaming etc (my main reason for joining 7 years ago), but it still separates those gamers by gender.

Women gamers also like to toss around the term female/girl gamer. I even do it once in a while. We do it because we want to break stereotypes and show that yes, even girls can be serious about games like the guys, but then we are drawing attention to our gender before our abilities in gaming.

I think that paradox will always remain as long as we (males and females) keep drawing attention to the issue (kind of like the CNN article and the whole discussion, along with even this blog post). It is something that will be hard to get rid of and if you look at it reflected in society, (take race and sexual orientation for example), as much as we say we want to not be singled out for what we are, we keep doing it to ourselves.

I think there really are a lot of females out there in the gaming industry (and all it encompasses). I know I used to feel so alone and found that wasn't the case, but you won't know until you start looking. Often those women are hiding right in front of you but just never mentioned their gender because it wasn't a big deal for them or it might have even been a hindrance for them in the industry.

Gaming shouldn't be a gender role... gaming is a passion enjoyable by all; and when we start acting like it, we won't be looking around for where the women are hiding because they will be right in front of us next to their male counterparts as equals.
Posted by Anex at 1:38 PM