Lucky for me I was thinking ahead and recorded TWO videos last week with the intention to save one for release this week because I'm SICK!

As if I haven't had a crappy last two weeks with the headaches etc (CAT scan came out normal by the way, they say my brain just needs time to recover) I now have a really bad cold. If not for recording last week I'd have no video to release today, so yay for thinking ahead. 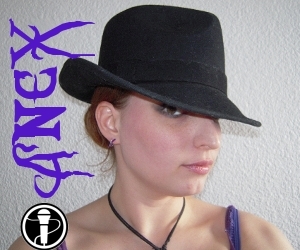 This video features the famous "hat" that I'm wearing in my new twitter pic etc. My good old fedora that I bought many years ago and thought would be fun to wear in this video. I missed it, don't get enough chances to wear it and took advantage to take that picture. I've also gone ahead and used the picture for a new youtube avatar since people liked it so much.

Other than that the song itself again wasn't hard (headaches don't motivate me to try harder stuff),
there's a phrase in there that is really long and fast to say that I get a bit messed up every time I try to say it (and I put an annotation so you can see). You'll probably hear that I actually half faked my way through that phrase lol.

While the song isn't exactly in my preferred genre I'll give it that it is fun to sing because it is fast and bouncy, that and it's always awkwardly fun to sing "I wanna be your man" when you're in fact a girl.

I had a bit of trouble editing/rendering this one for some reason. Normally my Dazzle capture device (DVC 103) records in PAL 50 otherwise things come out black and white (if my xbox is set to PAL 60 for instance) so I generally have to render the capture first in NTSC format before I can edit with the picture-in-picture otherwise the sync is way off (the video moves faster than the sound). I did that today and it was way off sync. Tried using the raw file also off sync. I think I've wasted at least an hour rendering videos that were messed up.