I've been a bit bad about keeping up with my xbox's trip to Microsoft for repairs. I honestly thought I'd have a lot of time to write it, but surprisingly (in the good way) it seems my time is ticking.

As I mentioned previously due to hang ups with Microsoft (getting a shipping label) and UPS, my xbox actually began it's journey to the Microsoft repair center in Frankfurt, Germany on Friday January 29th.

I did my best to pack her well for the trip (my xbox has suddenly become a "she"). My most difficult task actually was finding a box to send it in. Microsoft no longer sends "coffins", so I was left to my own devices which included harassing every store in town for an empty box and weird, empty stares as I tried to explain I just wanted an empty box in broken French. When I finally found my words (I kept asking for a "boite vide" but it turned out I needed to ask for "carton vide") I learned much to my disappointment that most the stores had already threw out their boxes to a recycle company that morning. I was sure I was screwed to wait another week before I could send my xbox, but I pressed on.

I eventually came to a book store where a woman seemed really kind and not annoyed to help me find a box (the other stores/employees must of thought I was insane). She helped me find a decent sized box that was pretty sturdy (it was made for shipping books). The only downside was that the box had been opened strangely.. instead of opening it from a constructed flap, they had just cut a "door" on one side of the box. I wasn't sure, but I knew I had to make it work.

To pack my xbox up I used some bubble wrap I had lying around. It was actually the kind with HUGE bubbles that I had used in the past to ship my PC from the US to France so I was pretty confident that it was trustworthy. 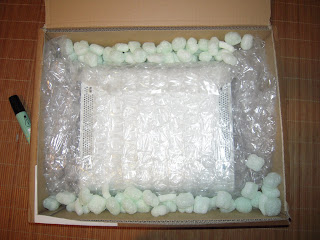 I wrapped my xbox with the bubble wrap which was long enough to reach two opposing ends of the box, making a snug fit. There was some empty space that I filled with Styrofoam peanuts that my husband had brought from work.

The tricky part was sealing the box and making sure when Microsoft received it that they opened it the way it had been sealed. I managed to scribble "do not open here" on every part that you THOUGHT would be logical to open it from, and "open this side" on the one place that didn't make sense. 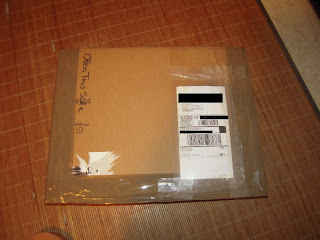 I wrote in English and hoped that would suffice. I also needed to make sure that UPS did not handle the box with the "door" side on bottom as it wasn't strong enough. So I drew an "up" arrow and once again hoped.

UPS came and took her away on Friday January 25th. I was sure I'd never see her again.. I had heard horror stories of waiting months and how you always get back someone else's refurbished xbox, but the repair process had been started and I had to follow it through. I wrote down her serial number and will verify whether or not I get MY xbox back or some impostor.

I followed her journey to Germany via UPS's tracking system. I was pleasantly surprised to see she arrived at her destination the next Monday (Feb. 1). The next day I received a confirmation e-mail from Microsoft saying that had my xbox and that repairs had been started. Wednesday I looked again to see how she was doing and nearly wet myself when I read "console shipped back". Seeing as how I started to realize how much I took my xbox for granted and have been struggling with Rock Band withdrawal I had to hold myself back from being too overjoyed. Maybe it was so fast because they just sent me another xbox?

Today I checked on the status (Feb. 4) and checked the tracking number after poking from my Dutch friend of win who reminded me it had one, and noticed that it had actually moved and at 8:30am this morning is only 20 something miles away. I can't help but feel anxious that perhaps I will receive my xbox today but at the same time I am trying to be realistic and not allow myself to hope too much that it comes today as it may not and it may not even be MY xbox..

I'm wondering how that box I sent it in worked out.. did they manage to figure out how to open it and reseal it back? The site said they sent it back in the box you send it in.. we will see.. I'm hoping "in transit" means it is in the truck on its daily route.
Posted by Anex at 11:18 AM